The Native CDFI Network is led by a Board of Directors comprised of a group of dedicated leaders and practitioners within the Native CDFI industry. Members of the Board support the Network’s organizational growth and development as well as it’s working committee structure that is designed to maximize our impact while engaging our membership base. In addition, the Native CDFI Network’s Board accommodates three Ex Officio seats that are filled by seasoned community and economic development professionals who lend their knowledge and guidance to the Network.

Pete Upton (Ponca) is the Executive Director of Native360 Loan Fund, a certified Native Community Development Financial Institution that focuses on entrepreneurship and financial literacy development for Native Americans. Serving as Executive Director since 2011, Mr. Upton has built the organization from its start-up phase into a successful lending organization that continues to experience growth while ever increasing its community impact.

Mr. Upton has been involved with the Native CDFI Network since it was a grassroots movement. From 2011-2012, he served on the steering committee that was instrumental in the Native CDFI Network’s initial organizational development steps. In 2012, Mr. Upton became a founding board member and served as the Chairperson for the Peer Learning Committee.

As Native360 serves Native communities in three states, Mr. Upton understands the challenges of serving both rural and urban areas in various different jurisdictions. He values strong networks and cultivates partnerships to deliver technical assistance throughout a vast service area. Mr. Upton is a powerful advocate for equal access to capital.

Fern Orie (Oneida) is the founding CEO of the certified Native community development financial institution (CDFI), Wisconsin Native Loan Fund, a statewide housing and consumer revolving loan fund. Ms. Orie has nearly 20 years of experience in the Native housing field. Prior to her community and economic development work, she was in the Indian gaming sector for 10 years. Ms. Orie holds a Bachelor’s degree in Business Administration from Lakeland University and received certification as an Economic Development Finance Professional (E.D.F.P) from the National Development Council.

Ms. Orie is a strong advocate and very active in the Native community and economic development field in her region and at the national level. She is the Chairperson of the Wisconsin Indian Business Alliance and has served on the Native CDFI Network Board of Directors as the Vice Chair and was the Chairperson for the Membership Committee. In addition, Ms. Orie serves on the Board of Directors and Loan Committee of Bay Bank, a tribally-owned bank. She is a member of the Woodland Indian Arts Board and also serves on the Forward Community Investments New Markets Tax Credit Advisory Board.

Cindy Logsdon is the CEO of the Citizen Potawatomi Community Development Corporation. In this role she oversees the loan servicing, internal systems management, administers the reporting and relationships with funding entities, as well as oversees the financial reporting for the organization.

Ms. Logsdon came to the Citizen Potawatomi Nation in 2003 after a 15-year career in banking. She is proud to have implemented new programs and has assisted in making over $45 million in loans to Native American entrepreneurs. She has laid the groundwork for introducing multiple products to her tribal community, such as: an Employee Loan program, Financial Education Initiatives, Credit Builder Loan, Jumpstart Auto Loan, Tornado Shelter, CSA and IDA programs. She is honored to have secured funds through the 2015 CDFI Bond Program for $16 million.

Ms. Logsdon currently serves as secretary on the local Tecumseh FFA Booster Club, is a board member of the Oklahoma Native Asset Coalition, is an advisory member of Midwest Renewable Capital, and is the Board Treasurer of the Native CDFI Network. 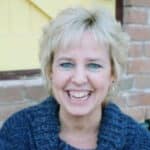 Ms. Mittlestadt has a long history with CDFIs and not for profit entities in Alaska – previously managing a $14 million Native CDFI focused on affordable homeownership and neighborhood revitalization initiatives with two co-occurring IDA programs. She presented the regulatory transformation of CDFIs to the NMLS registry and outcomes of using market study data to drive decision-making at the Native CDFI Network and OFN gatherings.

Ms. Mittlestadt was the principal owner of Huber Consulting Group, a business primarily focused on social and economic development project work, delivery of financial education, constructive grant application reviews, and a reviewer of federal funding applications. Early in her career she served as the Assistant Vice President of National Bank of Alaska, what was then the largest bank in Alaska with 52 branches statewide, encompassing corporate relations / business development, community development, and cash management.

Cora Mae Haskell is the Asset Development Coordinator at Four Bands. In this role, she provides outreach, coaching and technical assistance to promote financial literacy and credit building to best help residents of the Cheyenne River Sioux Reservation to access financial products and services. She holds a Master’s Degree in Education and Curriculum and a Bachelor’s Degree in Business Education from Black Hills State University and is a certified trainer for Fannie Mae/First Nation’s Financial Skillbuilding for Families coursework. Ms. Haskell continues her professional development by attending courses and national conferences on creating financial literacy and entrepreneurship programs for youth in economically disadvantaged communities.

Since joining Four Bands in 2003, Ms. Haskell has conducted business development and financial literacy workshops for hundreds of people and has been instrumental in establishing the Individual Development Account program. Prior to that, she was Dean of Academics at the former Si Tanka/Huron University and has accumulated more than 20 years of teaching experience in reservation communities. She has served as a co-chair for the Native Financial Education Coalition and is a former board member for the Eagle Butte District 20-1 school system. Ms. Haskell was named the 2008 Outstanding Entrepreneurship Educator by the Consortium for Entrepreneurship Education for her outstanding service to the field of entrepreneurship. She has been the religious coordinator for grades K-9 at the All Saints Catholic Church in Eagle Butte, South Dakota for 10 years.

Natalie Charley is the founding Executive Director of Taala Fund, a Native CDFI since 2009. She has a Bachelor’s degree in Business Administration and was the lead in Taala Fund’s start-up. She has prior experience as an education manager, seafood plant general manager, policy advisor, marketing director, and business consultant. Ms. Charley also served as a member on the Quinault Tribal Council. She was co-founder of a regional nonprofit organization,Potlatch Fund,” and was also on their board.

Russ is the Executive Director of The Sequoyah Fund, Inc., located in Cherokee, NC. The Sequoyah Fund offers commercial loans, training, consulting, and coaching to small businesses located on the Qualla Boundary and the seven westernmost counties of North Carolina. In addition to lending and training, The Sequoyah Fund provides support services for Cherokee artists, fundraising programs for nonprofits and youth organizations, shared office space to local businesses, a savings program and financial literacy education for local children, and youth entrepreneurship education and summer camp.

Robin Puanani Danner (native Hawaiian) is the CEO and Co-Founder of the Homestead Community Development Corporation (HCDC) operating the Homestead Loan Fund, and affordable housing and community facility projects, including a certified kitchen, marketplace, and enterprise center. As a 501c3 incorporated in 2009, the HCDC mission is to create affordable housing, jobs and capacity building on or near Hawaiian Home Lands.

Ms. Danner is also the elected chairman of the oldest and largest coalition of self-governing homestead associations – the Sovereign Council of Hawaiian Homestead Associations (SCHHA). She is a former bank executive, tribal housing authority executive, a county housing and economic development director and the founder of the Council for Native Hawaiian Advancement (CNHA). She has been awarded numerous national leadership and housing awards, as well as small business awards including the SBA Minority Business Advocate of the year, twice – once for the State of Alaska and another for the State of Hawaii. A nonpartisan, Ms. Danner advocates for good public policy regardless of party or identity of a policy-maker, and instead focuses on the implementation of goals that achieve priorities of an agency or government leaders (state, federal, tribal and homestead associations).

She is from the island of Kauai, born and raised in Niumalu, and attended public schools on the Navajo and Hopi Indian reservations, as well as the north slope of Alaska. She is the product of life-long educator parents specializing in Native children and built a successful career in banking and Native solutions to housing and economic development. She is well versed in both private sector and public sector agencies, each of which play vital roles in the well-being of Native peoples. Ms. Danner resides on Kauai with her husband where they raised four children.

Christopher Coburn (Muscogee Creek and Cherokee) became the CEO of Mvskoke Loan Fund in 2017, and has received great support from the Muscogee Nation, the Mvskoke Loan Fund Board, and others in the CDFI industry. With a focus on micro-enterprise lending, he established a strong training culture offering 27 courses to 700 individuals in 2018 alone. In December 2018, he spearheaded the launch of a consumer lending division and is working on the development of a Section 184 mortgage lending product.

Mr. Coburn has a diverse background with many varied life and career experiences, which have contributed to the formation of his “working head coach” and “compassionately competitive” leadership style. He has 25 years of management experience in various industries, including consumer and commercial banking, higher education, public utilities, and marketing. In addition, Mr. Coburn has owned and operated two small businesses himself. He views the CDFI industry as the best challenge of his career yet, helping others overcome financial obstacles and achieve their goals.

Jackson S. Brossy is an enrolled member of the Navajo Nation with several years’ experience in management, federal advocacy, non-profits and private consulting. Growing up on the Navajo Nation, he knows first-hand the need for access to capital for Native entrepreneurs and has devoted much of his professional life to advancing opportunities for Native American economic development. Previously he headed federal affairs and relations for the Navajo Nation in Washington, D.C. As Executive Director of the Navajo Nation Washington Office, he regularly met with Congressional and federal stakeholders to advocate for advances in tribal policy. In this position, he developed testimony, testified before Congress, managed an office, developed a budget, hired professional staff, and maintained communications with leadership stakeholders.

Prior to working for the Navajo Nation, he worked in the private sector in Washington as both a management consultant for tribal governments and tribal corporations and also as a manager for a Native-owned federal contracting company. Jackson has also worked for the National Congress of American Indians (NCAI) and specialized in economic development policy.

He holds a Bachelor’s degree from Stanford University where he studied economics, statistics and public policy. He earned a Master’s degree in Public Policy from the Harvard Kennedy School of Government where he studied business and government policy. He is from the To’aheedliinii (Water Flows Together) clan. He lives outside of Washington, D.C. with his wife and children.