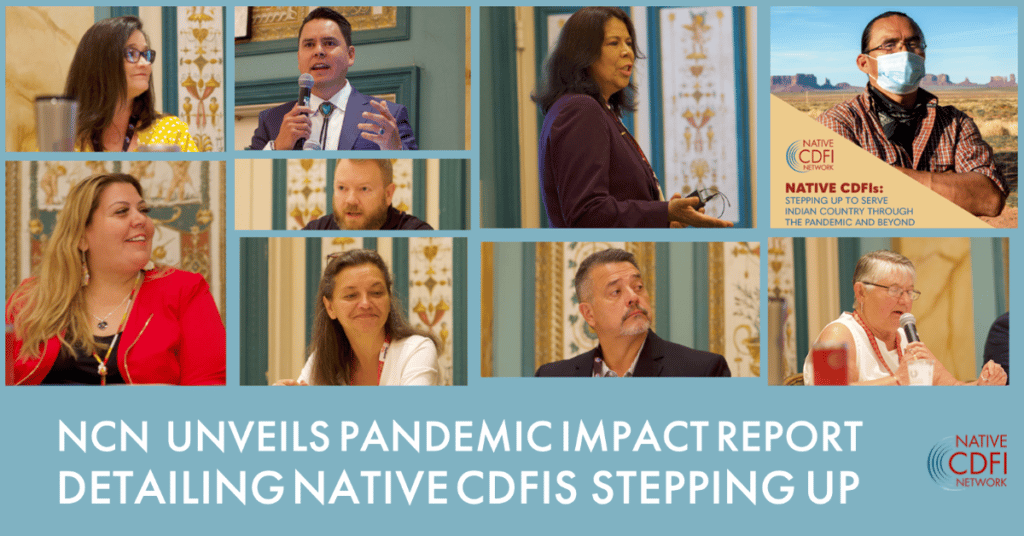 LAS VEGAS—Today, the Native CDFI Network (NCN) released its impact report, “Native CDFI’s: Stepping up to Serve Indian Country through the Pandemic and Beyond.” In the early days of the pandemic last year, the organization realized the effects of the crisis went beyond the health and safety of tribal citizens. NCN recognized that it would need to play a significant role in helping ease the economic pain in Indian Country due to the pandemic and shut down. NCN leaders sprang into action to deal with the unprecedented financial challenges for tribal business enterprises’ survival.

Pete Upton, board chair of the Native CDFI Network, said, “For NCN, the immediate mission focused on helping members deal with the crisis and share best practices.” Upton credits NCN Executive Director Jackson Brossy for taking the lead in finding members the resources they needed to help their clients survive and for bringing a sense of calm to a chaotic situation. “I remember Jackson and I just having a conversation and saying that we need to take a deep breath and step up and bring the resources to the table for everyone. A lot of times, resources might not necessarily be financial resources,” Upton said. “Everybody was in the forest, and they couldn’t see outside the forest. What we wanted to do was create a path outside of all the chaos.”

Native CDFI team members put in long hours to work with customers and clients left economically vulnerable by business closures, stay-at-home mandates, layoffs, added costs and supply chain pressures — even the virus itself. Native CDFIs are built on community relationships. So when the community was hurting, staff at Native CDFIs across Indian Country needed to find ways to step up and help. And they did, piloting new programs, connecting clients to various resources and working with them creatively to make their financial commitments less burdensome as they focused on healing — economically, physically, and spiritually.

“We took a positive approach to work through the pandemic,” Brossy said. “We brought in to the conversation folks that could help us navigate different federal programs set up to assist not only the small businesses but also Native CDFIs. Our primary focus was giving the CDFIs the resources to help their customers and small business clients, whether it be through the Economic Injury Disaster Loan program, the SBA offered, or state programs that were being offered.”

NCN members needed increased access to capital for home loans, small business loans, consumer loans and agriculture loans. Each CDFI may focus on one or two of those products, but NCN focused on all of these loan instruments instead of one. By bringing all the resources to those Native CDFIs, they could walk through the tough times they were having and weather through the pandemic.

Above all, they stayed open and responded to client needs with loan forbearance, new products and new service levels. Now, they are poised to serve their communities in more significant ways than ever before.

NCN and its members will convene for the first time in person since the pandemic hit at its Annual Policy and Capacity Building Summit Sept. 14-15 in Washington, DC. The event could go virtual if necessary, depending upon COVID-19 guidelines.

For more information on the Native CDFI Network, visit www.nativecdfi.net or at Facebook at facebook.com/nativecdfinetwork/